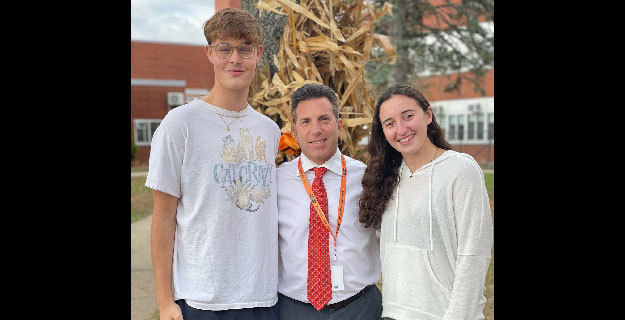 Seniors of the Month – October

H. Frank Carey High School has announced that Paul Cirone and Tyler Mazzella are the Seniors of the Month for October.

Paul is the true epitome of a well-rounded student. He is a tremendous asset to the Carey community and has been a force in our school. He is extremely bright and excels in all academic areas. He is an enthusiastic and involved member of the Class of 2022, Italian Club, Carey Clipper and Poseidon. This extremely talented young man has been an exceptional member of the Musical and Drama Clubs since the seventh grade. He is an amazing leader and is this year’s co-president of the National Honor Society and president of the Musical. He was also this year’s homecoming king! When he is not tutoring other students or working part time jobs, you will find this innovator managing several social media accounts for influencers where he has reached over 50,000 followers. We will certainly miss him next year as he pursues a career in public relations.

Tyler is an outstanding and talented senior who brings spirit, commitment and a level of respect to all of her endeavors. She embodies what it means to have Carey Character because of her leadership, loyalty and work ethic. This impressive senior has been inducted into six honor societies, is the co-founder and co-president of the Girls for Girls Club, layout editor for the Carey Clipper, co-president of Think Pink, co-vice president of Student Government and member for the yearbook staff and Class of 2022. She has done all of the this while achieving high honor roll status every marking period that she has been a student at Carey. A scholar of the highest caliber, she completed the Johns Hopkins CTY Intensive Studies summer program and the Girls With Impact Mini-MBA summer program. Additionally, she is an AP Scholar with Distinction. For these reasons and so many others, this remarkable senior has earned the respect of her teachers, the administration and her peers.