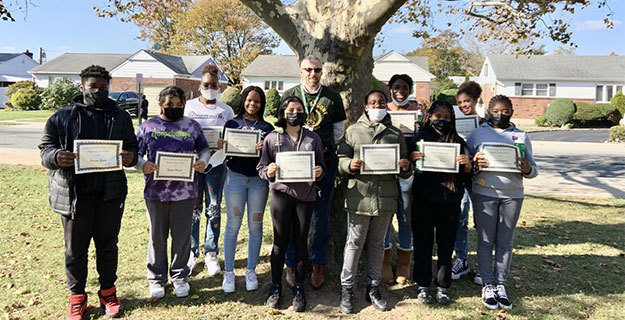 Mr. Whelan nominated Joel Fearon:
The student who has been displaying traits that portray a great citizen would be Joel Fearon. Over the course of the year, Joel has shown extreme growth; not only in maturity, but also in his overall character that has not gone unnoticed. He has been setting an example to other students of how to get work done and be able to meet expectations that have been set for him. For example, we were recently doing group work in class where his fellow group member did not have a way to complete and participate with the work. Without hesitation, Joel offered the student to use his smartphone so that he wouldn’t fall behind. This displays a sense of leadership and compassion for his fellow student. Through these and many other reasons, Joel has earned the Citizen Award.

Mr. Nuara nominated Xochilt Solorio:
Xochilt Solorio is diligent, genuine, kind and inquisitive. Her work shows her to be a creative, inventive and a perceptive thinker, as well as a hardworking and ambitious student. In class, she is always focused and attentive while being conscientious towards her work. Going above and beyond is the norm for her, and she truly gives 110 percent each day. Xochilt demonstrates a high level of maturity, relating well to adults as well as to her peers. She is well mannered, quietly respectful, driven to do her best and sets a great example for other students. Xochilt always treats others with kindness. She is very kind to all the students she encounters throughout the day, regardless of whether or not they are part of her friend group. If more people approached life with the positive and kind attitude of Xochilt, the world would be so much better off. She is a prime example of a model citizen and what makes teaching at Elmont Memorial so special.

Mr. Agoro nominated Justine Jacques and Kassie Rosier:
Justine Jacques is a model citizen because she is selfless and takes time in the class whenever she can to help fellow ELL students who speak French or Haitian Creole. She assists the students and even does all group activities with them while continuing to be a successful scholar in the classroom. Justine is very deserving of this award, and I appreciate having her as one of my students.

Kassie Rosier is a model citizen for a bunch of different reasons but the one that stands out is all of the students call her “the GOAT”! One day, I asked why is Kassie “the GOAT?” and the student said because she’s like a mother, who helps everyone with everything from social studies to living environment. Kassie helps everyone with studying for all the classes. She doesn’t just help people in my second period class that she’s in, she also helps students out in my third, fifth and ninth period class. Being that selfless as an eighth grader is a great trait to have. She is a model student, and it’s a pleasure to have her as one of my students.

Mr. Reff nominated Najwa Patterson:
Najwa Patterson is a model citizen for Elmont Memorial and the community. She works hard every day to improve her school and community. Najwa works towards this goal by being an active member of numerous clubs at the school. She’s one of three band leaders in the marching band. Overall, Najwa is a model citizen of Elmont by putting others first and doing everything she can to better her community.

Mr. Innes nominated Samuel Simon:
Samuel Simon is a model citizen who brings awareness to anti-bullying. Through his hard work, in and outside the classroom, Sam models perfect citizenship. I have personally witnessed Sam's dedication to creating environments for all students to succeed. Whether it's in the halls or the classroom, Sam is striving to be the best student in the school. This includes his leadership on the field, guiding those around him. Sam deserves to be recognized because he is the type of student that establishes a positive work setting. Sam is the student all teachers need in the school. He is a scholar that will work as hard as he can and pick up those around him that need the help. With Sam's leadership, students just do better.

Ms. Cervoni nominated Amira Elrington-Edwards:
Amira Elrington-Edwards is an exceptional student in the Global History and Geography program. In the short time that I have known her, she has displayed her love for learning and often engages her peers and teachers in thought-provoking conversations. Her academic performance remains one of the best in her class. Amira is eager to help any classmate with academic or technological concerns and always does so with a smile. Her positive attitude, general good-naturedness and outgoing personality make her a popular student among the faculty, student body and school administration. Amira is a prime example of a model citizen and what makes teaching at Elmont Memorial so special.

Mr. Sweeney nominated Oroboghene Obaro-Ogbovoh:
Oroboghene is the quintessential example of not only a truly great student academically and athletically, but also as a role model citizen. She always conducts herself as a respectful young lady to all. The way she consistently demonstrates humanity towards others, it is obvious that she carefully and perpetually interacts with students based on a high standard of morals and ethics. She is an excellent example that students can look up to, especially during a month recognized as Citizenship (Anti-Bullying Awareness) Month. Her actions speak louder than her words as she is the homecoming queen, a team leader in volleyball, VP and treasurer of M.U.N., member of Key Club, a member of multiple honor societies and recently interviewed on News 12 for a scholarship she was awarded. All in all, she demonstrates kindness and mutual respect, and uses her time for the betterment of her class, helping others in the school and having a positive impact on her community.

Mr. Cabrera nominated Mondy Olivier:
Mondy Olivier has demonstrated that she is a Model Citizen at Elmont. Mondy always has a positive outlook in school and is willing to help others. She showed her gratitude by giving back to those families who are in need. Mondy is willing to give it her all on a daily basis and is eager to be the best student and person she can be.

Ms. Folchetti nominated Natalie Herrera:
Natalie Herrera is a student who is thoughtful, dedicated and extremely hardworking. She consistently embodies all values of Elmont Memorial High School and works hard to achieve academic excellence. Natalie is helpful to her peers in class and always strives to do her best.

Congratulations to all our October Model Citizens!