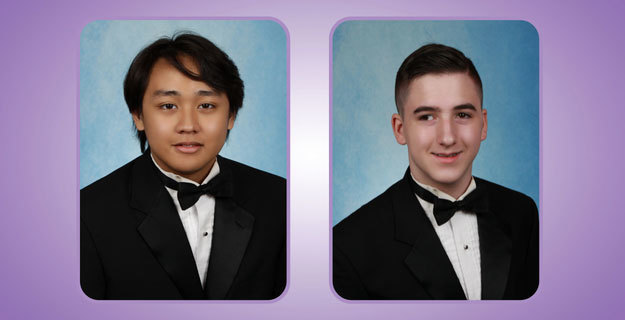 Sewanhaka High School has named Carl Montoya and Sean Andrade as the valedictorian and salutatorian, respectively, of the Class of 2023.

Carl’s academic success is made clear through his inductions into the National English, National Technical, National World Language and National honor societies, as well as the National Society of High School Scholars. He received a perfect score from College Board on his AP research paper: “An Analysis on Mobile Games: Effects of Microtransactions on Gamer Overspending.” Through his enrollment in the district’s pre-engineering program, Carl participated in NASA’s TechRise Challenge. Along with his teammates, he created an instrumentation package aimed to measure carbon dioxide, ozone, volatile organic compounds and air particulates in the atmosphere with the goal of improving air quality technologies. He serves as president of both the Sewanhaka Green Club and Chess Club. Outside of school, he is senior patrol leader of Outpost 8 Royal Rangers and a member of his church’s Youth Council.

As a member of the National Honor Society and the National World Language Honor Society, as well as having High Honor Roll recognition, Sean excels in his classes at Sewanhaka. He has also achieved High Honors recognition from the John Hopkins Center for Talented Youth. Sean is enrolled in the district’s pre-engineering program and is active in extracurriculars, serving as a member of the Robotics Team, the Class of 2023 Board, the Superintendent’s Advisory Council and the district’s jazz band. He, along with his peers on the Robotics Team, earned an Inspire Award during the FIRST Tech Challenge robotics competition. Additionally, he is a member of the Nassau County Interscholastic Mathematics League. Aside from his school responsibilities, Sean is a church lector and tutors his peers in math and science.