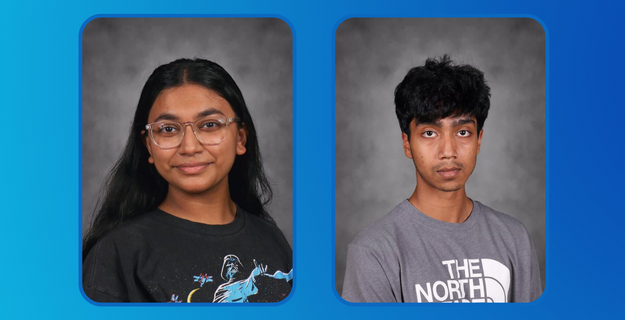 New Hyde Park Memorial High School has named Priya Persaud and Taseen Tanzil as the valedictorian and salutatorian, respectively, of the Class of 2023.

Priya’s accomplishments are made apparent through her multiple honors and awards, including her selection as a National Merit Scholarship Program semifinalist and a Brown University Book Award recipient. She is also a member of the Mu Alpha Theta National Mathematics Honor Society, Rho Kappa National Social Studies Honor Society, the Literary Luminaries National English Honor Society and the National Spanish Honor Society. During the summer of 2022, Priya participated in a cancer research internship under the direction of a Human Oncology and Pathogenesis Program principal investigator at Memorial Sloan Kettering Cancer Center. Additionally, through the school’s science research program, she participated in discussions related to research being directed by Dr. Stavros Zanos in the Translational Neurophysiology Lab at the Institute of Bioelectronic Medicine within the Feinstein Institutes for Medical Research. Along with her research, Priya is extremely active in her school’s extracurriculars. She leads the varsity tennis team as captain, the G.E.A.R. Book Club as president and the Science National Honor Society as president. Priya also dedicates her time as secretary of the Science Olympiads, treasurer of the Class of 2023 Student Board and treasurer of the Spanish Club.

Taseen is regarded as a driven and ambitious student. He is a member of the National Junior Honor Society, National Technical Honor Society, National Science Honor Society, Rho Kappa National Social Studies Honor Society, Literary Luminaries National English Honor Society and Mu Alpha Theta National Math Honor Society. His recognition as an AP Scholar with Distinction is a further testament to his academic prowess. Since sophomore year, Taseen has been enrolled in the district’s distinguished pre-engineering program. With a passion for STEM and robotics, Taseen dedicates his spare time to pursuing his passions. As a member of the Robotics Club, he has assisted his team in building, designing and coding a robot to compete against other schools. Along with his team, he earned a first place Connect Award at the 2021-22 Long Island Championship of the FIRST Robotics Competition. Outside of school, Taseen is the Youth Squad Social Sergeant at the Glen Oaks Volunteer Ambulance Corps. He also has spent time as a tutor for the high school regents exams, a mentor at the school’s summer enrichment camp, a volunteer at the Hillside Islamic Center and a volunteer at Hillside Pediatrics P.C.