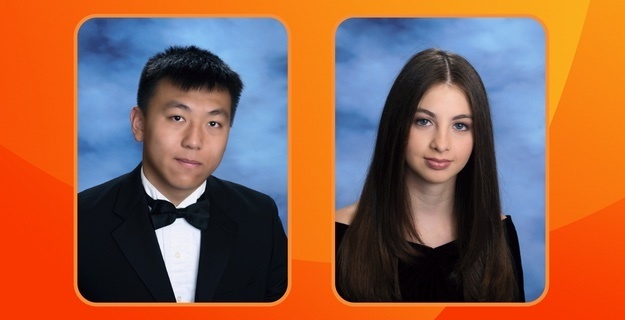 H. Frank Carey High School has named Ryan Yu and Caroline Gilman as the valedictorian and salutatorian, respectively, of the Class of 2023.

Ryan is regarded as an extremely focused individual with a drive to excel. He is a commended leader, serving as class president, captain of the junior varsity football team, captain of the varsity football team and editor of the yearbook throughout his time at Carey. Along with his accomplishments in football, Ryan has been recognized as an All-County track runner and an All Division swimmer. His ability to achieve excellence in both academics and sports earned him the honor of being recognized as a Scholar Athlete. Academically, Ryan has achieved multiple accolades. His high scores on his AP exams earned him the recognition of AP Scholar with Distinction, and he was also named a Commended Student in the National Merit Scholarship Program due to his score on the Preliminary SAT. Additionally, his admirable grades have kept him steadily on the school’s High Honor Roll from grades 7-12.

Caroline is well-known for putting her heart and soul into the school. She dedicates her time to participating in multiple extracurriculars and serves as president of the SkillsUSA Club, founder and president of German Club, fundraising coordinator for the Spanish Leadership Club and captain of the varsity tennis team. As a member of the Robotics Team, Caroline co-created and helped lead the school’s R2D2 Day, which encourages young women to get involved in the STEM field. Her acute leadership skills resulted in her selection as a school representative for the Superintendent’s Advisory Council and as one of 100 students worldwide for the University of Notre Dame Leadership Seminar. Caroline’s academic prowess is made apparent through her selection as an AP Scholar with Distinction, as well as her induction into the National, Math, Science, English, Social Studies and World Languages honor societies.