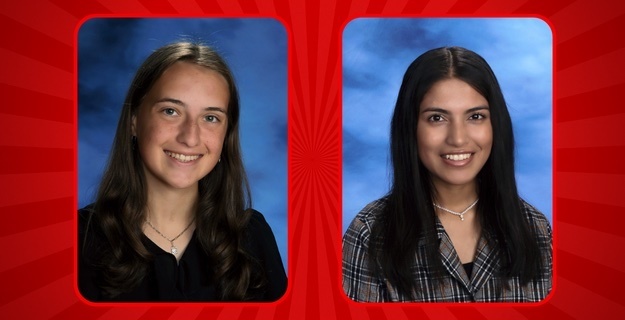 Floral Park Memorial High School has named Deirdre O’Neill and Samannita Mukherjee as the valedictorian and salutatorian, respectively, of the Class of 2023.

Deirdre is well-regarded as an intelligent, ambitious and gifted student. Her academic successes are apparent through her multiple accolades, such as earning High Honor Roll each year and being named an AP Scholar with Distinction and a Commended Student in the National Merit Scholarship Program. Deirdre has also been inducted into the National, math, science, and English honor societies. In her junior year, she participated in the 2022 Long Island Youth Summit where she won Best Project in the category of Renewable Energy. Deirdre is also incredibly active in the school’s athletics. She has been a dedicated soccer, lacrosse and basketball player since her freshman year. In her sophomore year, she was selected by her coach to receive the Coach’s Award for her performance and leadership during the basketball season. Recently, Deirdre was recognized as an Outstanding Physical Education Student for Nassau Zone.

Samannita is known throughout the building as being inquisitive and kindhearted, as well as having a drive for success. She has been enrolled in 11 AP classes during her time at Floral Park Memorial and has been recognized as an AP Scholar with Distinction. She has served in various leadership roles, including as president of the Science National Honor Society and secretary of the Mock Trial Club. As president, Samannita helps students as a tutor and plans science-related activities to stimulate students’ scientific curiosity Additionally, she has been a dedicated member of Mathletes and Leos Club. Also having an interest in music, Samannita has been in chorus every year since the fourth grade and a valued member of the Long Island Sounds acapella group during her junior and senior years.